The Purple People Bridge will be awash in red tonight from 9 p.m. to midnight as part of a regional and national effort to recognize hardships faced by the hospitality and entertainment industry and its employees as a result of the COV-19 pandemic.

MAC Productions — the Covington-based company that specializes in live event production for national conferences and special events for corporations, associations and non-profits and now offers a proprietary platform for virtual conferences and expositions – is lighting the bridge, the Northern Kentucky Convention Center and other such facilities red this week, along with others in the industry who are doing the same, as part of a “Red Alert” to bring awareness about the plight these businesses and their employees are facing.

“This is a regional and national effort to make the public aware of the hardship these businesses are suffering because of the of the coronavirus pandemic and the fact these they are not able to operate during this time, which also means that their employees cannot work,” said Mike Claypool, owner and president of MAC Productions, which is celebrating its 50th year as a business this year.

Arts, cultural, and live events as well as conventions were among the first industries shut down because of the pandemic and most of them remain closed today, which means that millions of people in our region and across the nation who work in this industry are unemployed or underemployed, Claypool said.

“Unfortunately, these businesses also will be among the last to return to operations once the crisis is over, which looks like it will be in 2021 at the earliest. As a result, about one-half of these businesses are expected to lose between 70 percent to 100 percent of their business this calendar year, and unfortunately, that means that many of them are not likely to make it through the pandemic.”

These businesses also are asking the public to support the RESTART Act, which would continue and expand the pandemic unemployment assistance legislation passed by Congress earlier this year that provided funding to many of these employees who are out of work. This legislation is currently stalled in Congress.

Jack Moreland, president of the Newport Southbank Bridge Company, the 501(c)(3) organization that operates the pedestrian-only bridge between Newport and Cincinnati, said his organization is among those in the region who have been adversely impacted by the pandemic.

“As a nonprofit organization with no endowment or readily available sources of private or public funding, we operate the Purple People Bridge primarily from the rental fees we get from events on the bridge,” Moreland said. “While the bridge remains open to the public during the pandemic, since March, we have not held any events on the bridge, a situation that looks like it’s going to continue for a while, unfortunately.”

Among the other venues that are participating in the Red Alert: 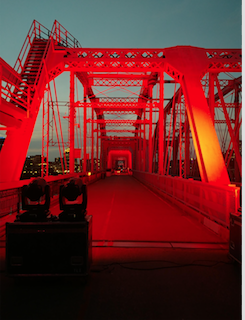 Every month, an average of 71,000 people run, walk, bike, and skate across the Purple People Bridge. The bridge is owned and operated by the Newport Southbank Bridge Company, a private 501(c)(3) nonprofit organization that operates and maintains the bridge. To learn more, visit its website.

Review: With high sorcery, ‘The Craft: Legacy’ casts a spell |…