The company aims to increase the number of its 12m monthly active online users “several times over” in the next three years through apps that will compete with popular new delivery channels from Sberbank, Russia’s biggest bank, as well as tech companies Yandex and Mail.ru.

Igor Shekhterman, X5’s chief executive, told the Financial Times that the company wanted its new array of delivery services to attract new customers to its more than 17,000 stores under its Pyaterochka convenience store and Perekrestok supermarket brands.

Whereas competitors like discount grocer Magnit and fast-growing organic chain Vkusvill have embraced the tech companies’ delivery apps, X5 launched Okolo, a competitor to them, this month.

It plans to add restaurant delivery to the app next year at a lower commission rate than Yandex’s Eats and Sberbank and Mail.ru’s Delivery Club, which have been criticised by proprietors for their commissions of as much as 35 per cent.

“You can call it an ecosystem or not, but we are going to use it to create services that will help us attract more customers, follow them each step of the way, and monetise them as much as we can,” Mr Shekhterman said. “What we don’t want to be is part of someone else’s ecosystem and lose part of our margins while giving away customer interaction.”

The reason we’re doing all this is to lower our costs, and the costs we lower are additional investments in the customer

By October, Perekrestok and Pyaterochka were fielding 22,000 orders a day, while revenues at Perekrestok Vprok, an online-only service from dark stores launched in 2018, rose more than 200 per cent year on year in the third quarter this year.

Though revenue from all X5’s online services was Rbs4bn ($52m) in the third quarter of this year — a fraction of its Rbs486bn total revenue — Mr Shekhterman believes the business is set for rapid growth thanks to its strong brand recognition and in-house logistics. Unlike Lavka and Samokat, which use dark stores and outsource delivery to contractors, X5’s own couriers make deliveries from its shops.

“Our sales are independent, we sell through our own app, and it’s integrated the rest of the way through our fulfillers in the shops and our own couriers,” Mr Shekhterman said. “Their assortment is limited in a dark store, it’s about 2,000 [items]. We have 5,000 in Pyaterochka and 12,000 if you do it through Perekrestok.

“So the average ticket on express delivery is Rbs1,500 from Pyaterochka and Rbs1,800 from Perekrestok. That’s two or three times as much as all our digital competitors, and our revenue is higher as a result.”

Like its tech rivals, X5 is also looking to harness customer data through a unified login it hopes will form the basis for a future loyalty service modelled on Amazon Prime. 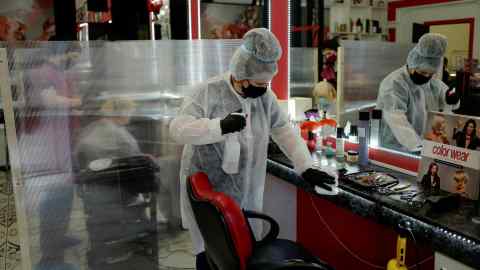 X5 also launched an Amazon Go-style automated minimart in Moscow last week, and is in discussions about joint ventures with Alfa-Bank, Russia’s largest private bank, with which it shares owners in Mikhail Fridman’s Alfa Group of oligarchs.

The data will help X5 navigate Russia’s recession caused by the coronavirus pandemic, Mr Shekhterman said, and has inspired the company to plot a new line of discount stores.

“The situation in the country will get worse, so we believe in this segment,” he said. “The reason we’re doing all this is to lower our costs, and the costs we lower are additional investments in the customer . . . How can you offer affordable prices without lowering your margins? Only by lowering your expenditure.”

European tech companies are beating Amazon at its own game