Demonstrations are taking place in Louisville, Kentucky, on Saturday as the famous Kentucky Derby horse race is being held amid ongoing racial unrest and demands for accountability in the police killing of Breonna Taylor.

Anti-racism protesters are expected to rally Saturday afternoon outside Churchill Downs, where the 146th annual race will be run on Saturday evening.

Taylor, a 26-year-old Black woman, was killed by the police on March 13 in a raid on her home in Louisville, prompting months of protests and demands for the officers involved in her death to be charged.

Alongside George Floyd, a Black man killed by police in Minnesota in May, Taylor has become a symbol in a continuing movement decrying racial injustice and police violence against Black people across the United States.

The local chapter of Democratic Socialists of America said the far-right group had come to the city “to threaten” the protesters demanding justice for Taylor.

Louisville Attorney General Daniel Cameron on Saturday said that while running the Kentucky Derby honours a long-held tradition in the US state, “we remain cognisant of the community’s desire for answers” in Taylor’s case.

Cameron said his investigation into what happened is continuing.

Meanwhile, Vice News on Friday reported that authorities had prior knowledge that Taylor’s boyfriend, Kenneth Walker, a registered gun owner, may be present in her apartment during the raid.

Walker fired at officers after they entered the apartment, prompting the police to return fire and fatally strike Taylor. Walker has maintained he fired a warning shot and the officers did not identify themselves before entering the apartment.

Kentucky is a so-called “stand your ground” state, meaning a resident – who is in a location where they are legally allowed to be – is permitted to use deadly force if they feel they are being threatened with death or severe bodily harm.

The authorities’ knowledge of Walker’s possible presence in the apartment raises further questions over the tactics used on the night of Taylor’s killing.

Today, while we honor a KY tradition with the running of the Derby, we remain cognizant of the community’s desire for answers in the investigation into the death of Ms. Breonna Taylor. We continue to move forward with our investigation, reviewing each fact to reach the truth.

For months, activists in Louisville and elsewhere have demanded concrete action in Taylor’s case – and they had called for the Kentucky Derby to be cancelled.

Until Freedom, an activist group that has organised rallies in support of Taylor said it planned to protest against Saturday’s race to demand accountability for her killing.

“There should be no Derby in this city right now. The only thing that should be happening in this city is the arrest of the cops who killed Breonna Taylor,” one of the group’s co-founders, Mysonne Linen, told reporters during a news conference on Friday.

The mayor of Louisville, Greg Fischer, said on Twitter on Saturday that rumours and misinformation have circulated on social media since the protests began.

He did not specify what he was referring to exactly, but said the city’s police department “has a plan and is ready for Kentucky Derby day”.

Meanwhile, local media outlets reported that members of the far-right militia group had gathered in a Louisville park on Saturday morning and later marched downtown. 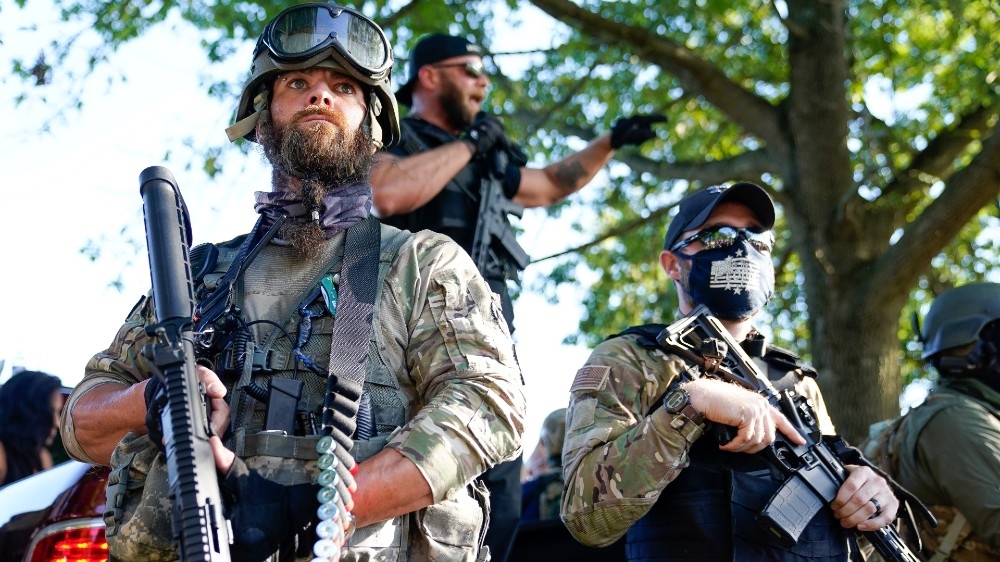 Far-right activists and self-described militia rallied in a park in Louisville, Kentucky, on the day of the Kentucky Derby horse race [Bryan Woolston/Reuters]

Dozens of people, including some carrying semiautomatic weapons and wearing what appeared to be bulletproof vests, chanted “U-S-A! U-S-A!” and waved US flags, according to a video posted online by WLKY journalist Lauren Adams.

The group is led by a man calling himself the “Angry Viking”, the local news station said.

“The group is calling themselves patriots and say they’re sick of the chaos in Louisville and across the country,” WLKY reported.

Right-wing groups have sought to disrupt racial justice protests across the US in recent months.

Recently, two demonstrators were shot and killed during a Black Lives Matter protest in Kenosha, Wisconsin. A 17-year-old gunman who espoused right-wing views has been arrested and charged in connection with the attack.