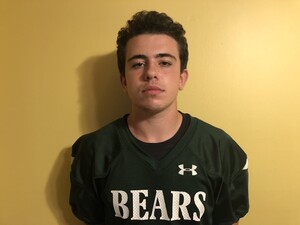 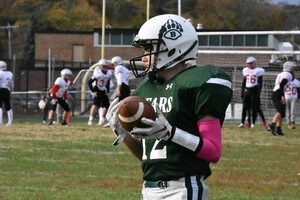 Brewster High School junior Nicholas Sayegh has been nominated by his coaches for USA Football’s Heart of a Giant award. The award program seeks to highlight tri-state high school athletes who demonstrate characteristics like commitment, character, teamwork, dedication and will.

Sixty of the top nominees, including Sayegh, have been entered into an online voting competition. The top 60 will be whittled down to 11 finalists, with each receiving a $1,000 equipment grant for their school. A winner will be chosen and awarded an additional $4,000 and a trophy.

Nick was honored when he learned JV football coach Ron Reid nominated him. “It definitely turned into a special week with all of the support from the community and my peers,” Nick said.

Nick is hard working both on and off the field with a 4.0 GPA and two jobs. After a challenging freshman year, Nick worked hard in the off season to become a better and stronger player. His efforts were noticed and he was presented with the Coach’s Player award and was named JV captain his sophomore year.

“I have nothing but positive things to say about Nick,” said Coach Reid. “As the captain of his team, he was a great motivator. Nick Sayegh is humble, dependable and hardworking. He embraces everyone. There is no doubt in my mind that he will continue to be an excellent addition to Brewster High School and the entire athletic department.”

You can vote for Nick once every 24 hours until October 4: https://usafootball.com/hoagvote

‘One Day for UK’ fundraising kicks off

Local rides for Great Cycle Challenge USA | Get Out & Go