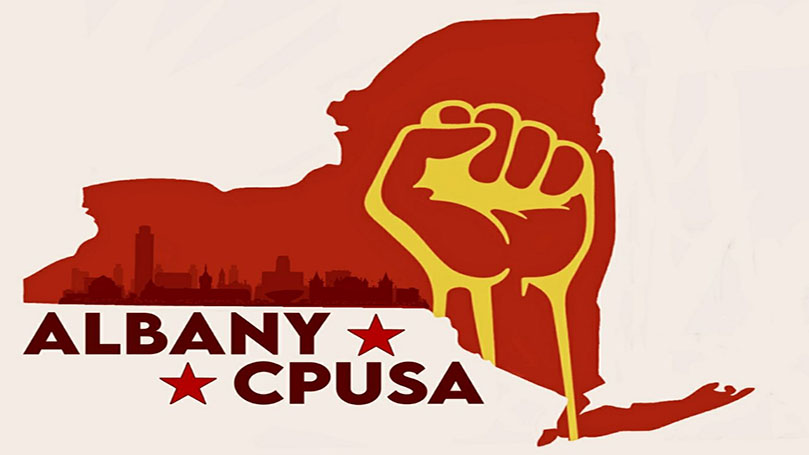 As unemployment rises, health care crumbles, and politicians keep their backs turned, for a lot of people there seems to be no hope. However, in these seemingly dark times we live in, we are seeing the people’s struggles continue. For the last six months comrades in upstate New York’s Capital Region have been meeting regularly in the midst of the COVID-19 crisis and the uprising in support of civil rights and the Black Lives Matter movement. Driven to action by the deepening democratic crisis caused by the Trump administration’s incompetence in dealing with the pandemic; the police lynchings of Ahmaud Arbery, Breonna Taylor, and George Floyd; and the violent crackdown on Americans exercising their First Amendment rights, comrades across northeastern New York took to the streets while also committing themselves to the process of meeting, learning, and dedicating themselves to the struggle. The need for change has never been greater, and comrades of the Capital Region answered the call, resolving to charter a new club on the auspicious date of July 26, with a nod to the Cuban Revolution.

Leading up to the July 26th Constituting Conference, the group, meeting through video conferencing, read through CPUSA Club Guidelines, the Organization Department’s “Holding Effective Meetings,” and dozens of Telegram (messaging app) polls about details. Taking time in each of their bi-weekly web meetings to build camaraderie, friendship, and a place of mutual respect, members of the club rotated chairing the meetings, leading discussions on different readings, as well as keeping each other tuned in to what local events were occurring. The club chair described this period as

Every other week the cadre met, proving that the time-honored tradition of local community organizing is alive and well in today’s global and often nationally focused climate. One member described the feeling of the Capital Region club:

Albany understand[s] that you cannot reap the rewards if you do not put in the work. Work such as engaging communities, organizing manageable collective goals, . . . Albany has ideals, but it does not live in a fantasy.

The strong foundations of camaraderie and trust that had been laid during the months of planning would prove invaluable during the work of the Constituting Conference. After toasting the birth of the Capital Region’s new club with champagne (and sparkling cider), members sat down to begin the earnest work of building the year’s plan of work. Unanimously, the group recognized the need to work with and organize around the issue of unemployment councils. Drawing on members’ existing relationships to trade unions and local labor organizations, the club resolved to build the organization of the unemployed into the foundation of the club’s work. One member pointed out that “unemployment councils intersect with not only employment, but food security, education, housing, health care, social security, and so many more timely issues.” With this in mind, the cadre recognized the unique perspective Capital Region comrades can bring into these arenas.

The club also aims to continue the struggle for the United States Postal Service to remain public and effective, and to overcome the abuses currently being wrought by this administration and their unethical, privatizer appointee, Louis “Delays” DeJoy. It sees the Postal Service as just that—a service, not a business—and a true defender of people’s democracy. The club also prioritized building relationships with other clubs, partnering with local legislative organizations, and meeting with local legislators, along with an extensive training schedule for organizing, recruiting, and self-defense in the face of growing right-wing violence against people of color, LGBTQ folks, and women.

The cadre also identified the struggle of the local indigenous nation, the Mohawk of the Haudenosaunee, as part of the plan of work. Collaborating with the Mohawk-led organization, the Three Sisters Sovereignty Project, the club has begun to help with the ongoing work surrounding Mohawk and indigenous sovereignty and help create long-term solutions to the unique oppression of the Mohawk people. The club hopes to bring in comrades from around the state to assist in this pressing work.

Since the club conference, the need for this community-building work has been thrown into stark relief. The women-led sovereignty project had initially found a home on a small farm in the Schoharie Valley, the ancestral and unceded land of the Mohawk nation. This farm had been signed over to the nation under a “long-term lease” which included access to a highly sacred ancestral site. However, the non-native “owner” of this land felt personal influence over the project should be expanded, and, unwilling to recognize the sacredness of the land or the culture of the Mohawk nation, they chose to retaliate by evicting the Mohawk family living on the ancestral land.

Tapping into the Party’s long history of building organizers—not simply activists—the club built long- and short-term plans for training sessions in anti-racism and security culture. In the face of growing white supremacy and the threat of the far right, the club looks to move away from a defensive position. Recognizing that within our own Party there exists the knowledge and experience to inform the next wave of comrades and organizers, Albany welcomes any opportunity to work with and collaborate with comrades and other cadres around the state and around the nation.

As the sun sank into the waters of the Hudson River at the end of the club conference, the club toasted once more to a successful year, to socialism, and to each other. As they sang “The Internationale” in conclusion, the club recognized that the work had just begun, and they have a world to win.

Education System in the UK During Pandemic COVID-19

USA Surfing Goes to BSR to Train for Olympics